I wanted to help these people and this place, La Casa de la Misericordia (The Mercy House).  I made a few announcements during mealtimes, that I wanted to make a group and fill it with their stories on my website, Project 1:1000.  It would be the first instance of a Community Group on the site, and quite a beginning at that.  I announced that I would be staying at the shelter for two more nights, in case anyone would be willing and brave enough to share their stories with me.  Cuidado con lo que pide… (Careful what you ask for…)

I came up with 10 questions that I thought would provide enough information for a 1000-word Submission here.

I would soon learn that simple questions can have complicated answers - way more than you bargained for.  It was around 8pm on September 22, 2021.  I know this because I pushed the record button soon after that announcement, just after dinner that night.  It’s strange to know almost the exact moment your life changes, the dividing line between who you were and who you became, between what you didn’t know and what you know now.

Over the next 44 hours, I would amass six hours of audio recordings of 15 interviews.  Question 1 (“Where are you from?”) was easy.  Everyone I spoke with was from Mexico, and all but two parties from the state of Guerrero.  The answers to Question 2 (“Why did you leave?”) were variously infuriating, terrifying, saddening, and sickening.  They told tales of a vast, interconnected web of organized crime in Mexico – both cartel and non-cartel-related – and spoke of experiencing, witnessing, or learning of varying degrees of extortion, threats, recruitment pressure, robbery, assault, kidnapping, rape, and murder.  I had read about such things.  I had seen TV series and movies dealing with such matters.  But I had never been so close.  I had never asked such questions, or been in a place safe enough to discuss such matters.  Then again, I suppose safety is a relative word.  I guess we felt safe with each other.  That was the important thing.

The first who was willing to talk was a young widow and mother of two.  In what appeared to be a case of mistaken identity, armed thugs had burst into their home, looking for someone unknown to the couple.  Her husband was awakened and struggled with one intruder, who, as his weapon was turned against him, called his accomplices in from outside.  Moments later, the husband ran out of the house and trailed blood into the darkness.  They found his lifeless body a short time later, riddled with bullets a block away.  One witness said that, as he lay dying, the thugs thought he would escape, so “…one would shoot him, then another...and that another one would come by and shoot him…He was already dead and they kept shooting, so that he was full of bullets.”  She filed a complaint, and a few young men were arrested.  She was forced to flee with her babies due to threats and intimidation when she refused to withdraw that complaint.

44 hours later, I couldn’t handle anymore.  I had heard too much.  Not that I didn’t believe these things could happen – truth being stranger than fiction and all - but to hear about these things firsthand from victims and witnesses was something altogether different and real and awful and heartbreaking.

I packed up my computer and my camera and my microphones and my field recorder and my clothes and my toiletries and my snacks and packed them into my air-conditioned car and had someone open the gate so I could leave.  I needed a break.  Children and adults waved goodbye with faces and hands filled with what I saw as a mixture of gratitude, envy, sadness, fatigue, helplessness, and hope.

The only thing worse than hearing their stories was leaving the place.  Being able to leave the place.  A survivor’s guilt, a guilt of the privileged, wrapped me up and sickened me.  Why do I get to leave?  Why am I not on the run?  I was again simultaneously filled with gratitude and shame.  I was again reminded of my winning the cosmic lottery long ago, out of no virtue or effort on my part.

I spent the next month in an air-conditioned fog, 45 miles and a world away, at the house of a family friend summering in Wisconsin.  I began to transcribe a few of the interviews, but mostly laid low, licked my wounds, and watched football.  Because I was able to.

When my lodging ran out and my heart and soul had healed a bit, I returned to La Casa at the end of October and spent 10 nights mostly helping around the office and the classroom.  I conducted five more interviews over 2 ½ hours, for which I was more emotionally prepared.  As much as one can be to receive such things.

The devastation of hearing these stories, sharing these tragic spaces, was multiplied as I later learned more about the immigration process.

The first step of being granted entry into the United States is the “Credible Fear” test, which, according to U.S. Citizenship and Immigration is proving the…“‘significant possibility’ that you can establish in a hearing before an Immigration Judge that you have been persecuted or have a well-founded fear of persecution on account of your race, religion, nationality, membership in a particular social group, or political opinion if returned to your country.”

My fear is that very few of the 61 people represented in these interviews will pass this test as it is currently defined.

During my stays at La Casa, it became clear that it would be safe for me to publish neither identifying images of the residents, nor specific details of their stories.  It became one of my most sobering assignments.

The absence of their faces speaks sad volumes.

I suppose credible fear is in the eye of the beholder. 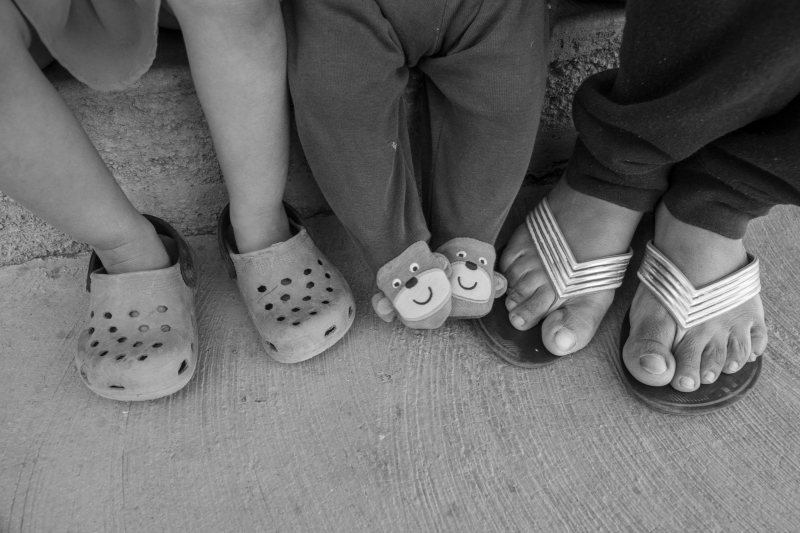