I took two quick trips to Nogales with Pastor Randy in September 2021.  His church (The Good Shepherd U.C.C.) in Sahuarita, Arizona, is part of the Southwest Conference of the United Church of Christ, which, along with the Arizona Diocese of the Episcopal Church and the Grand Canyon Synod of the Lutheran Church of America, are three major players who provide assistance to various migrant shelters on the Mexican side of the border.  We had driven by the Kino Border Initiative and dropped off a few things at the Albergue Juan Bosco (Juan Bosco Shelter), but my favorite had become La Casa de la Misericordia (The Mercy House).

From when they took possession of the place – or, at least where the database begins (March 9, 2019) – until September 2021, sisters Alma Angelica (“Lika”) and Esther Consuelo (“Chelo”) Macías Mejía helped around 600 migrants find shelter; food; education for children, women, and on human rights issues; immigration assistance; and physical and mental health services.  Some 70% of the migrants had been from Mexico - some 75% of those from the state of Guerrero (location of Acapulco).  The average age of those requesting assistance was around 18 years old.  Chelo had made the mistake of asking me for help with their database, and was quickly inundated with suggestions, formulas, tabulations, and data points galore.  Cuidado con lo que pide (Careful what you ask for).

In addition to material donations of food, clothing, and other items, the various denominations help fund a slim budget of $150,000 USD per year.  This accounts for the sisters’ salaries as well as those for two teachers (one of whom is subsidized by a grant from the Mexico Department of Education) and a psychologist as well as food, water, utilities, repairs, and all other expenses for the…well, what amounts to a compound…that serves as much more a kind and quiet refuge than should be expected just four miles south of the border.

In this border town swarming with organized crime, cartel agents, and recruiters, the place is necessarily and rather impressively secure – at least its appearance.  It is on one of a thousand dirt roads on one of a hundred hills of Nogales.  A huge gate must be manually opened and closed to allow entrance.  A 10–15-foot brick/chain link/barbed wire fence surrounds the entire 1.6-acre (70,000 sq ft) footprint.

There is a humble basketball court and a field of dirt for soccer.  The main office is next to the men’s dormitory.  The quarters are tight inside, with bunk beds at most 5 ft away from each other.  More of a barracks than anything else.  More room would be nice, but not necessary.  No one has too many things.

The women and children’s dormitory is down the hill.  It is more comfortable, with more room there, but altogether too small for so many women and children.  Still, all things considered, an infinitely better situation than the one they fled to arrive here.

There is a garden, to which they had just finished connecting proper irrigation/watering pipes.  Some of the residents were surely farmers, and all benefited from the planting of seeds, the cultivation of something new and beautiful and alive.  And perhaps edible.

There is a library/presentation room/school, outside of which is some shabby playground equipment and rides.  This serves as part library, part daycare, part classroom, part medical center, part meeting room, part dining area.

Above the kitchen/dining room are 8-10 rooms with multiple/bunk beds each for emergency/visitor use.  During the height of the COVID pandemic, it became necessary to quarantine numerous residents there in order to slow the virus’ spread.  The danger mostly passed, its rooms would become my living quarters, office, and recording studio.

Children take turns running around the compound, ringing the bell at mealtimes.  It seems much more of an honor than a chore.  The adults take turns with the rest: kitchen duty; cleaning the dining room, the dormitories, the grounds, and the bathhouse; and tending to the garden.  These are a people accustomed to work, and they are glad to do it whenever and however they can.  Perhaps even more so here, where there is no charge for their stay, they are quick to help, build, repair, maintain and improve the place both for themselves and for those they know will be arriving later.  Outside the dining hall, an enormous handmade brick oven towers as a testament to both the gratitude and skill of former residents.

After my initial visits with Randy, I returned for three nights in late September, then again for ten nights in late October.  I took photographs, conducted interviews, helped with the website, and worked with the older students for a few days.  I was a witness to el Día de los Muertos (Day of the Dead), dances, birthday parties, laughter, tears, desperation, hope, wonder, and numbness – all of them fair in this oasis south of a desert I pray they never decide to cross on foot.

I would also never blame them for doing so.

One of my questions during the interviews was, “What does this place mean to you?”

In their own words:

“It’s a place of support for us, a safehouse.”

“…we see it as a miracle…the best thing that could have happened to us.”

“I see it as safe here...we're fine here.  We want for nothing.  We are at ease...blessed be God and...now here, with the little food that there is, we are reaching all those who have arrived here...I felt...as if I would cry...” 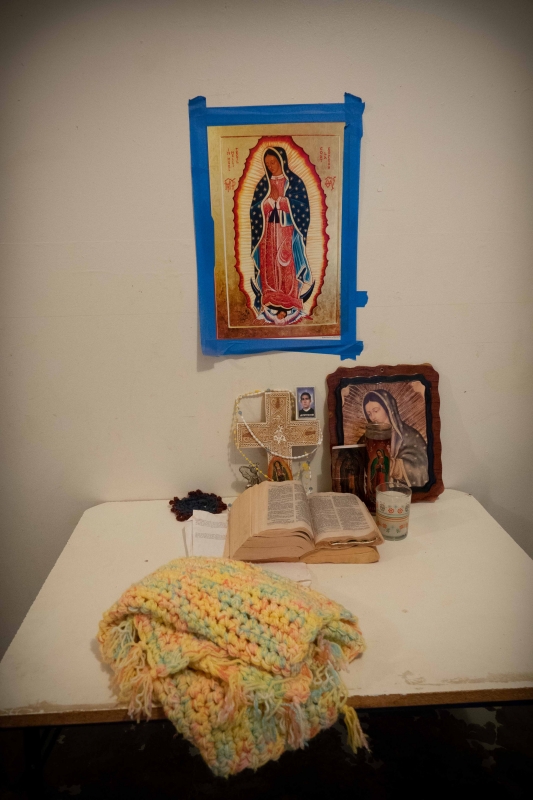