I don’t remember seeing Randy much after he was a chaperon for me and a group of kids who attended the United Church of Christ National Youth Event in Grinnell, Iowa, in the Summer of 1988.  I was 17 and crazy, and it was a fun trip.  I wasn’t really churchy, but I did like the summer camps and youth events.  Mostly good, church-centered people both repelled and attracted me.  I kinda thought they were nerds for believing like they did, but their goodness offered me an alternative to an equal attraction to darkness and self-destructive escape.

33 years later, as I quarantined in a friend’s house after 22 months in Seattle and before hunkering down for a quarantine winter with Mom, I received an email from Randy.  He contacted me via my photography website, where he had seen and envied my roadtrip to Argentina.  He reminded me he’d married a girl from El Salvador and that they’d driven as far as Panamá but wanted to go all the way down.  He had been a pastor for 23 years south of Tucson and invited me to come down and check out his work with migrants sometime.

The timing was highly suspicious.  I told him I was open for suggestions come springtime, and we indeed did reconnect after a few months.  I had checked out the website for the Green Valley/Sahuarita Samaritans (GVSS) and informed him of some of my misgivings in regard to assisting migrants, that it might be a sort of enabling, an encouragement to make bad decisions and take dangerous chances, knowing that aid might well lie just across the border for those who would break the law and enter the country illegally.  I didn’t know how to say “giving them water” might even be the wrong thing to do without sounding like a terrible person.  But Randy understood.  He was also a liberal cat from conservative Montana.  He simply said, “As a Christian, I think it’s the only thing to do.”  Touché.

I arrived in Green Valley on September 3 and headed out on my first Water Drop two weeks later.  The GVSS has four regular routes on the backroads from the border to 15-20 miles north.  On this day, it was me, Darrin – a pastor visiting from Ohio, and our leader, Eric – a retired military man who instructed as he drove us in one of the four vehicles GVSS had for missions such as this as well as Search & Rescue.

The storage area of the SUV was filled with crates of gallons of 30-some gallons of water as well as small baggies filled with granola bars and other snacks, hand-packed by yet more volunteers.  300-some people are interested and/or actively involved in GVSS.  We left the church with food and water at 8am and headed south toward Mexico.

After exiting the interstate, we used GPS coordinates to traverse the sometimes gnarly backroads of the Sonoran desert, made worse this year by an epic monsoon season, which I had much underestimated.  I was caught in a downpour outside of Flagstaff on the way down, and I hadn’t seen that hard of rain since traveling through Central America.

We made eight stops at water caches, made so by the latched wooden boxes constructed by some and stenciled in blue with AGUA (water) by others.

Eric wore leather welding gloves for the first reach into the water boxes, which were known hiding places for black widow spiders.  Indeed, we would see four or five lurking inside the boxes that day.

Some caches were only a few feet from the roadway.  Others were a bit farther away.  We each carried a gallon jug of water in one hand.  A few times, Darrin was kind enough to double up in one hand so that I could capture video and stills.

Eric and Darrin inventoried the water supply, noting how many had been taken and how many remained.  GVSS keeps very good records of such things, letting the data show the route trends, indicating possible new locations for water caches.  The Search & Rescue crew communicated their findings of evidence (debris, clothes, backpacks, etc.) to ascertain similar route trends.  This mostly answered one great question: How do passing migrants know where find the caches?  It would seem a sort of mixture of GVSS data and placement, and migrant fortune and communications, with possible coyote (paid guides for migrants crossing the border) assistance.

Noted also were the jugs of water that had been damaged, destroyed, and/or discarded.  Indeed, there are enemies of such humanitarian efforts.  Eric seemed to think such sad destructions were acted out by hunters who happen to stumble upon the cache.  My initial misgivings regarding water provision seemed even farther behind me just then, and I wondered about the mental and emotional state of one who might come across such basic human needs, gifts for struggling strangers, only to open up the box and stab, smash, or empty such things.  The effort expended to be so cruel made me sick and sad to be an American.  This cannot be who we are.

Six hours after we began, just before exiting the backroads to pavement and our return home, we rambled around a corner.  In the road were 5-10 migrants, clothed in camouflage.  Upon seeing us, they scurried into the brush.

We stopped the vehicle and exited.  I cupped my hands and shouted in Spanish that we were friends and asked if anyone needed medical aid.

I said we had been replenishing the water caches and that we had food and water.

We waited again.  Again, nothing.

I said we would leave some water for them here, and we hoped they were okay, and that we were from Green Valley/Sahuarita Samaritans.  We left six gallon jugs on a flat rock on the side of the road, then continued down the road.

Eric had never seen a single migrant during his 2½ years of Water Drops. 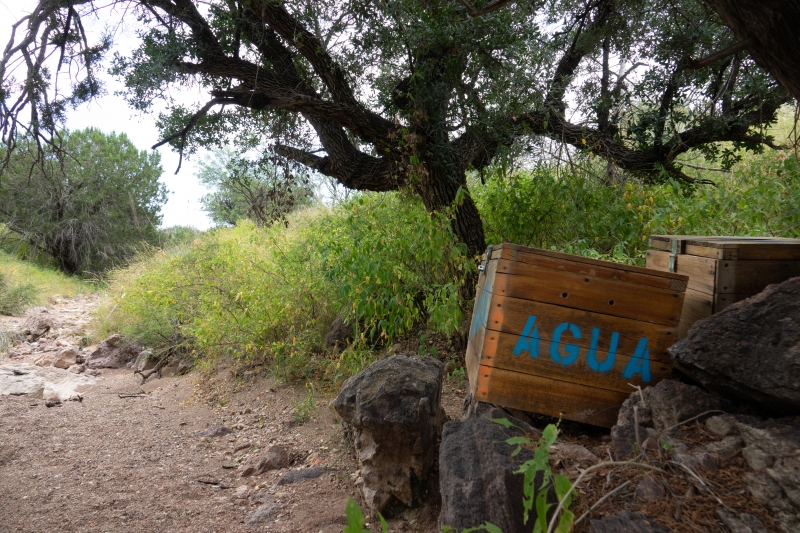